The Fantabulous Peacock-pheasant of Palawan 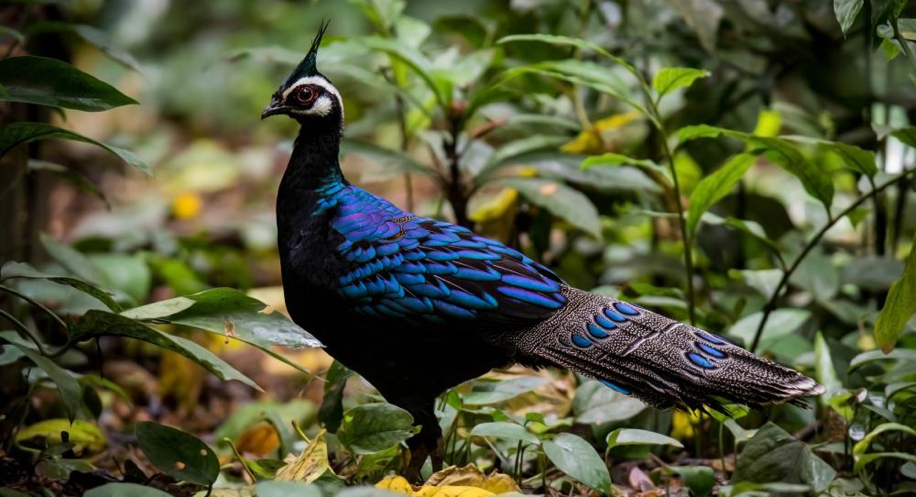 For something so dazzling and extravagant, you wouldn’t expect this bird to be extremely shy and elusive! Once it detects danger, it quietly and quickly walks away, leaving your sight without a trace!

Measuring up to 50 cm long, male peacock-pheasants are much more colorful and attractive than their female counterparts. In fact, males of this species are considered to be the most handsome among all the peacock-pheasants! The male tandikanhas a conspicuous and highly iridescent metallic blue-green decorating its back plumage. The bare red skin around the eyes is bordered by a white stripe just above the eyes and a white teardrop-shaped patch on its cheeks. Its tail feathers are embellished with two rows of large blue-green ocelli, which are spread fan-like in courtship display. They also have 2-3 spurs on each leg. And nothing can be more fabulous than a fancy crest of feathers on its head. The males have just that crest regally held erect above their heads and raised or lowered at whim.

Peahens, on the other hand, receive less attention as they are smaller (~40 cm) and dull in appearance. They have an overall dark brown plumage with an off-white throat, cheeks and ‘eyebrows.’ They have no spurs on their legs and are topped with a shorter and less erect crest.

Tandikans adapt and breed well in captivity where it is known that they can live up to 15 years. In courtship, the male carries a small piece of food in his beak and drops it upon seeing his potential mate. If the female accepts his offering, he positions himself laterally in such a way that would best display his iridescent plumage and decorated tail feathers. He hisses while strutting in circles around the female and if she is impressed, she accepts and copulates with him. If it so happens that another male enters the picture, the two males may fight and compete using their leg spurs as weapons.

Competition with other males and breeding usually occurs at 3 years of age when males have developed their full adult plumage. Females, on the other hand, can lay eggs at 2 years of age. Their clutch size is normally 2 eggs incubated by the peahen for 18-20 days. Chicks are camouflaged by brown downy feathers and are fed beak-to-beak by their parents until they can survive on their own at ~10 weeks of age.

Even more interesting about this species besides its elaborate feathers and behavior is that it is only found on the island of Palawan in the Philippines. It is of cultural significance to the people of Palawan, even represented in the official seal of Puerto Princesa. Recently used as a flagship species, the Palawan peacock-pheasant serves as a symbol of conservation efforts not only of its species but all other fauna that are threatened with extinction.

These ground-dwelling birds inhabit humid lowland forests on flat and rolling terrain (up to 800 masl), with a preference for old-growth forests. The density of large trees is then positively correlated with their population density, however, as a result of the increasing incidences of habitat destruction in lowland Palawan – deforestation, mining, agricultural encroachment, illegal logging, and wood harvesting – their population is believed to be rapidly declining. They are also subject to hunting and capture for illegal wildlife trade, which qualifies the species under the Vulnerable threat category (IUCN).

Despite the continuing threats to its population, efforts to conserve the species and its habitat are ongoing. It is listed under CITES Appendix I, which prohibits hunting and habitat alteration in the entire island of Palawan. The species is known to occur in Puerto Princesa Subterranean River National Park, which is a protected area managed by the local government.

However, despite legislation calling for the protection of these species and their habitats, there is still much more that needs to be done. For one, laws need to be enforced strictly and effectively among locals and tourists alike. A scheme to guard and patrol the remaining forests of Palawan needs greater budget allocation. Making people aware that this wonder exists only in the Philippines through campaigns is a step towards securing their future. If enough people knew and cared about the unique wildlife in our country, we’ll have many years to enjoy our natural heritage as Filipinos.